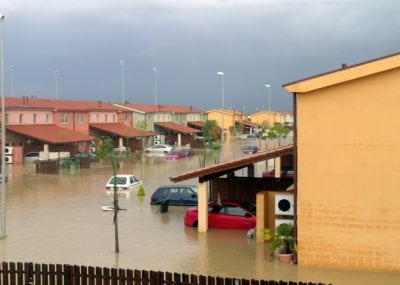 2017 was not the most successful for many Americans. And all because the season of Atlantic hurricanes, which usually lasts from June 1 to November 30, brought 9 hurricanes, of which 5 were above the third power category. The last 9th Nate, formed the other day, already reached the United States last night.

Often tropical storms are characterized by downpours, which subsequently lead to landslides and floods. Unfortunately, the human nature is such that, getting into extreme situations, people can not always rationally think and react quickly.

Imagine that bad weather caught you driving a car.
You must be saved on your own.

According to statistics, the highest chance for survival in those people who are selected from the car in the first 60 seconds. That’s why we decided to prepare for you a detailed instruction on how to escape from the car during a flood.

The first step: unfasten the belt.

The second step: try to open the window. Do not waste time trying to open the door. Water presses on it from the outside, so it’s almost impossible to do it.

The third step: if the electronics does not work, and the glass lifters do not fall, do not despair. You need to try to break one of the side windows yourself. It is desirable for this to have in advance some small and relatively heavy object – a hammer, a wrench, etc. If the situation caught you off guard, you can navigate and take something at hand, for example, it can be a heel or a pin from head restraint. In extreme cases, try breaking the glass with your elbow. It is best not to hit the center, but in the corner of the glass lift.

The fourth step: breaking the window, consider that you have already practically escaped. You only need to get out on the roof of the car. But if there are children in the car, unfasten them and first help get out the older child, and then the younger one. It is this sequence that gives more chances that everyone will survive. If the window can not be broken, then go to the fifth point.

The fifth step: wait until the interior is completely flooded with water. When the water comes to the ceiling, inhale the air as deeply as possible and then try to open the door. It remains only to get to the surface as quickly as possible.

And you are saved!

To sum up all the rules of the most rapid evacuation from the car, just remember this sequence: unfasten the belt, open the window and immediately get out.

If you pull yourself together, forget about the panic and follow the exact instructions, then you are 100% likely to be able to save yourself and your family members. But we believe that you and your family will not have to be in such situations.