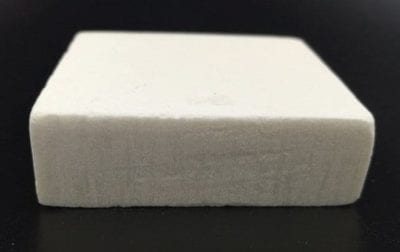 The synthetic material is durable and versatile.

The new lightweight material matches the durability of wood, but does not have its basic disadvantages, such as flammability and sensitivity to moisture.

To create synthetic wood, scientists added a small amount of chitosan, a polysaccharide obtained from shellfish shells, to the polymer resin. Drying the mixture after it was frozen, they received a material with high density of tiny pores and channels caused by the presence of chitosan. The next step was curing the resin at 392°F, which consists in the formation of strong chemical bonds.

Shu-Hong Yu, a chemist and materials science specialist at the University of Science and Technology of China in Hefei, explains that the material obtained in this way, whose production and properties were described in the August issue of Science Advances, is as good as the compressive strength of wood. The acceleration of cold drying allows to obtain smaller channels and pores, which increases the strength of the material, as well as the higher curing temperature of the resin. The addition of cellulose fibers is also beneficial.

In contrast to natural wood, obtaining a synthetic equivalent does not require many years. What’s more, the material is resistant to water. The tests showed that the mechanical properties of the samples soaked for 30 days in water and strongly acidic solution deteriorated only slightly, whereas the balsa treated in the same way was two-thirds less durable and 40% less resistant to compression. The new material is also resistant to fire; it is difficult to ignite them, and when removed from the flame, it goes off immediately.

Lennart Bergstrom, material engineering specialist at Stockholm university, who did not participate in the study, predicts that synthetic wood will be used to produce crush-proof packaging. And he adds that thanks to the porous structure in which air is trapped, the material can also be suitable for thermal insulation in construction. The number of applications should increase even further after finding ecological substitutes for the polymer resins used.