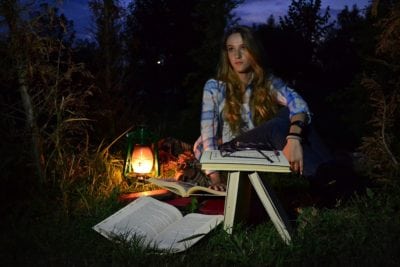 The correspondent of BBC Future researched the widespread belief that eye strain harms the eyesight. Strangely enough, the evidence in favor of this thesis is very vague.

If the parents at least once caught you reading in low light or in the light of a flashlight under the blanket, they certainly warned you that such eye strain harms the eyesight.
Maybe you’ve heard that it’s easy to recognize students at school because they are constantly sitting at the books and spoiling their eyesight.
Be that as it may, we all know the opinion that it is impossible to read regularly under poor lighting. However, a small study, carried out with the help of the Internet, is enough to make sure: this concern is far-fetched.

The question is closed? Not really. If you dig deeper and study scientific data, it turns out that this topic is much more complicated.
Let’s start with the simplest. Near-sightedness, or myopia, means that the person suffering from it can see things close to it, but remote objects, such as the bus number or the restaurant menu written on the board, seem to him vague.

Glasses or contact lenses help to solve this problem, but do not give an answer to the question of why some develop shortsightedness in their childhood, and some do not.
Our eyes are arranged in an amazing way: they are able to adapt to different levels of illumination. If you try to read in the semi-darkness, the pupils dilate to get more light through the lens to the retina.
With the help of this light, retinal cells – rods and cones – transmit information to the brain about what the person sees.

If you are in a dark room – for example, you have just woken up – this process allows you to gradually get used to the darkness, which at first appears pitch-black.
If you turn on the light, it will seem unbearably bright, until the pupils again adjust to the light.
The same thing happens if you strain your eyes while reading in low light. Eyes adapt to external conditions, but in some people such tension causes a headache.
Similarly, if you look at a book or sewing, bringing it close to the eyes, the eyes adjust, stretching the muscles so that the so-called vitreous body – the gelatinous mass of the eyeball, located between the lens and the retina.

Unfortunately, there were no experiments devoted to the long-term consequences of reading in the dark, so we will have to rely on a variety of factors and compare the information obtained.
Most research and scientific debate on the topic of short-sightedness is devoted to the impact on the eyesight of a constant work with closely located objects, rather than reading under poor light.
For example, in 2011 in the UK a study was conducted showing that working with closely located objects can affect the development of myopia in adults, but this factor is far from as important as, for example, birth weight or smoking during pregnancy.
In some regions, short-sightedness is more widespread: in some parts of East and South-East Asia, 80-90% of school leavers suffer from myopia.

This makes scientists think about whether the fact that children have to devote a lot of time to study is not the reason for this phenomenon.
However, geographical differences in the prevalence of myopia may be associated with a genetic predisposition: there is ample evidence that the genes inherited from parents play a very important role in the development of short-sightedness.
If both parents suffer from nearsightedness, their child inherits this disease with a probability of 40%; if both have good eyesight, the risk of developing myopia is reduced to 10%.
A classic way of assessing the degree of influence of genes on the development of the disease is to compare identical twins with raznoyaytsevymi.
A study conducted among twins in the UK showed that differences in visual acuity are determined by the impact of genetic factors by 86%.
However, as the authors of the study note, this does not mean that the influence of external factors can be completely neglected. These factors sometimes play an important role.

It can be said that parents who have done a lot of themselves and, as a result, spoiled their eyesight, are likely to induce their children, and the result will be written off for a genetic predisposition.
Or, children can inherit a heightened tendency to ocular diseases, which then manifests itself under the influence of excessive eye strain at an early age.
American scientist Donald Matthey and his colleagues tried to unravel this tangle with the help of a study that was conducted in the states of California, Texas and Alabama.
They found no evidence of a genetic predisposition to eye diseases and found that children of parents with poor eyesight spend no more time on books than their peers.
The main factor, according to the authors of the study, is nevertheless heredity.

Ray of Light in the Dark Realm

Returning to the possible influence of the external environment, we can consider a number of interesting studies on the impact of lighting – not a flashlight under the blanket, but a bright daylight.
Perhaps the problem is not that we spend a lot of time in the dark, looking at the pages, but in the fact that we are little in the world.
In the Australian city of Sydney, a study was conducted involving 1,700 children aged 6 and 12 years, according to which it was found that the more time a child spends on the street, the less the risk of developing myopia.

As a result of a systematic review of the studies, including those conducted in Australia and the US, the overall positive impact of exposure to light, particularly for the population of the East Asian countries, was identified.

What can daylight help? It used to be that sports games teach children to focus their sight on distant subjects, but within the framework of this study, children could do anything while on the street in the light of day.
Apparently, to some children this helped to compensate for the harm caused to the eyes by hours of reading or studying.
The authors of the study believe that the benefit of being on the street is not so much due to the need to look afar as to the effect of daylight on the depth of field and on the ability to clearly focus the vision.
Scientists even suggested that a longer stay in the light contributes to the production of dopamine, which can then affect the growth of the eyeball.
If this hypothesis is proven, it can serve as an explanation for the low prevalence of myopia in Australia.

To what conclusion can we come with such a variety of research on this topic and with such diverse results?

Undoubtedly, genes have a great influence on the development of myopia, but one can not discount the argument that external factors also play a role.
In the end, no matter how small the impact of the situation, it is much easier to change it than its genes.
At this stage, it can only be said that outdoor games seem to be good for the eyes and, probably, young children should be engaged in good lighting, so as not to overexert vision.
Since all the studies were carried out among children whose vision was in the making, the adults do not concern these findings, so if you really want to read with a flashlight under the blanket, this is unlikely to cause you any harm.
However, since you have already grown up and you can decide when to go to bed, maybe you do not need a flashlight now either?